Yakuza 0 is still several months from release, but SEGA has announced a collector’s edition for the series prequel in the form of Yakuza 0 “The Business Edition.”

Here’s what comes in “The Business Edition” according to SEGA:

A Stainless Steel Business Card Holder – This edition of the game will come with an ultra sleek business card holder tailor made for gangster executives. Show everyone in the boardroom you mean… business when it’s time to whip out the cards, because Kiryu’s ‘Ryu’ (dragon) and Majima’s ‘Hanya’ (demon) tattoo design adorn each side of the card holder.

Three Business Cards – In addition to the card holder, the Business Edition also comes with three professional business cards from Tachibana Real Estate’s Kazuma Kiryu, Cabaret Grand’s Goro Majima, and the cabaret club Sunshine’s hostesses. A major key to business is networking, so it would probably be a good idea to keep these cards somewhere close at hand. Besides, who wouldn’t want a colorful card graced with the lovely ladies from Sunshine? 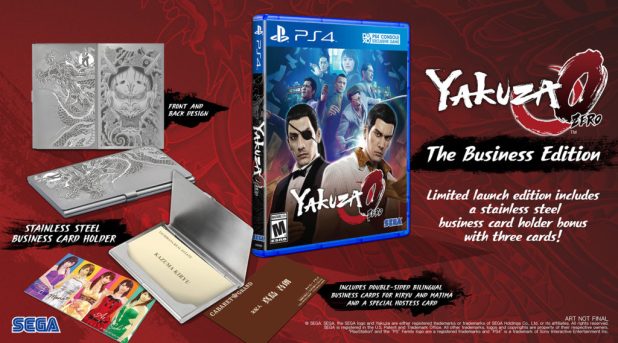 “The Business Edition” will be available for those who pre-order the game, with some also available on launch day, according to SEGA.

In SEGA’s press release, they also addressed rumors that Yakuza 0 could be coming to PC due to the boxart containing a “Console Exclusive” tag. “All that is confirmed and all that players should expect is a PlayStation 4 release. There is no PC version in production,” SEGA said.

Chris is the editor-in-chief of Mega Visions Magazine and the co-creator of SEGA Nerds. He was the former managing editor of Airman magazine and has written for publications like Joystiq, PSP Fanboy, RETRO magazine, among others.
SEARCH
FOLLOW US
JOIN OUR DISCORD
ADMIN
Processing…
Success! You're on the list.
Whoops! There was an error and we couldn't process your subscription. Please reload the page and try again.
Facebook Twitter WhatsApp Telegram
Back to top button
Close
Recent Posts
Recent Comments
Archives
Categories
Meta
Close
Log In