Have no fear, Super Sonic’s finally here to shine a light of hope in Sonic Forces!

Sonic Team released a Super Sonic DLC for Forces Friday morning, allowing fans to play as either the Classic or Modern form of the golden, superpowered hedgehog. Sonic transforms into Super Sonic upon collecting 50 rings, after which you can zip through over 20 stages as fast as your heart desires.

Super Sonic is free now, but on one condition. Unlike the first three DLCs–Episode Shadow, the SEGA/ATLUS costumes and the kindergarten-esque SANIC meme T-shirt–he will be free of charge until Jan. 23. Those who are tardy to the party will have to cough up $1.99 to download him. As if paying $2.99 for Sonic Runners Adventure hasn’t made us frugal enough already. 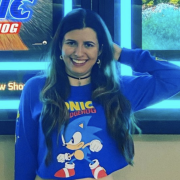 Cristina Alexander has been an avid fan of Sonic the Hedgehog since 2003. Her favorites include "Sonic Adventure 2," "Sonic Heroes," "Sonic Advance 3," "Shadow the Hedgehog," "Sonic Riders," "Sonic Unleashed," and "Sonic Colors." Her favorite video game franchises outside of Sonic include Kingdom Hearts, Pokémon, and Just Dance. She graduated from Florida Atlantic University with a Bachelor of Arts in Multimedia Journalism in 2018.
SEARCH
FOLLOW US
JOIN OUR DISCORD
ADMIN
Processing…
Success! You're on the list.
Whoops! There was an error and we couldn't process your subscription. Please reload the page and try again.
Facebook Twitter WhatsApp Telegram
Back to top button
Close
Recent Posts
Recent Comments
Archives
Categories
Meta
Close
Log In