Are you a fan of Shantae series of games? Have you been looking for a spiritual successor to Kid Chameleon? Do you wish SEGA would make a new Alex Kidd game? If you answered yes to any of these, you may want to check out Intrepid Izzy.

Intrepid Izzy is the new game developed by Senile Team and published by Ratalaika Games S.L.. It began as a successful Kickstarter campaign as was released on PC and SEGA Dreamcast of all places. Now, it has been released for Nintendo Switch, Xbox and PlayStation.

Starring the spunky girl Izzy on a quest to defeat an evil wizard, the story here is your standard platforming fare. Izzy does live in a colorful town full of weird people and creatures that you can talk to, but most of what they have to say is non essential barring a few specific instances.

There is a map for each area that is easily accessed, which is good as you will be doing a lot of backtracking to previously explored areas. This is a light metroidvania, so you’ll be looking for little nooks and crannies to find hidden items and areas. Also, there are bosses to encounter and defeat along the way.

Intrepid Izzy sports some colorful and clean high definition two dimensional art. Everything here looks great and animates well. Although the gameplay reminded me of many of the great two dimensional platformers of the past, the specific style of art may take some getting used to for some. The Shantae games from developer WayForward really appear to have inspired the character design and overall feel of the game.

Unlike Shantae whipping her hair at enemies, Izzy goes straight in with stiff punches, kicks that would impress Ken and a fireball to make Ryu blush. This girl has more sass than Sonic! Furthermore, Izzy can change into costumes, much like Kid Chameleon and gain new powers when she does. At your disposal are a squirrel suit, a miner hat, a vampire costume, an ninja, and a space suit. Each costume has abilities that allow you access to different parts of the map.

Soundtrack is one of the true highlights. The music by Ben Kurotoshiro really reminded me of an Alex Kidd game. I almost thought I was back in an Enchanted Castle a few times, which is high praise. However, the sound effects came off kind of tinny and canned which was a little disappointing.

Going back to go forward

In Izzy’s hometown, there is an arcade where you can play three different games. They will remind you of early 8-bit games. My favorite of the bunch was a Hang-On clone. I put way too much time into it, whizzing past other cyclists on my quest to first place.

If I seem heavy handed with the call back to previous platform games of the past, it’s because Intrepid Izzy leans heavy into them. It borrows from the past while and gives it a shiny new coat of paint. If you’re familiar with some of the games I have mentioned, they you will most likely enjoy this game.

I grew up playing all of the games I mentioned in this article. As such, this game was a real joy for me to play. I adore platforming and exploring on a two dimensional plain. Intrepid Izzy does so many things right. The only caveats are the sound effects, the fireball motion input for special moves, and the arc of the jump is just a little off.

For old school gamers, like myself, this game is a rare treat. It reminded me of many great games from the past. All of the little touches like the arcade games and the soundtrack just invoked so many great memories. If you’re looking to make some modern memories, while remembering the past, give Intrepid Izzy a try.

Intrepid Izzy is a modern Metroidvania that will make old school gamers go back to the future. 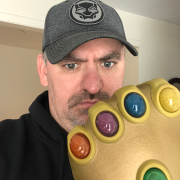